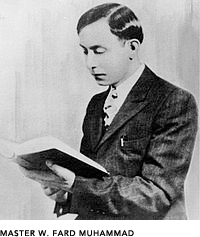 “But in the days of the voice of the seventh angel, when he shall begin to sound, the mystery of God should be finished, as he hath declared to his servants the prophets.” – 10:7

In this blog post, we will discuss the seven saviors sent to the people of the planet earth over the past 6,000 years. We will dive deep into the life, history and mission of the finial savior known as the Mahdi or Master Fard Muhammad.

The Seven Saviors, Messiahs or Mahdis

Rama was born in India and is sometimes referred to as Vishnu. He was a black man sent to the people living in India during their time of strife.

“As S.N. Sadasivan explains in A Social History of India, “pastoral gods or fertility deities all over India were of dark complexion, which they as irresistibly beautiful and religiously auspicious.”

Sadasivan continues, “The seductive charm of the black complexion has been the object of floral adoration of southern poets from ancient times and the Ramayana itself extols the ecstatic beauty of Rama’s dark color.”

Persians have started a religion based on his legened known as Zoroastrianism. His name as also been recorded as Zorro or Zoroaster.

This third savior came to the people of South America and delivered what would eventually become known as the Mayan Calendar. Many Blacks migrated to Africa after this savior revealed the truth of the origins of the light races.

When corruption was brought to Egypt God raised Moses. Moses was brought with a dual purpose. His purpose was to give comfort to the suffering people of Egypt under Pharoah and to raise the caucasian into civilization in Europe.

For more details on this refer to our post 6000 and 4000 years ago what happened?

The fifth savior was Jesus. His teachings would eventually become the Gospel used for Christianity.

The sixth savior was Muhammad. His teachings would eventually become traditional Islam used by the Orthodox Muslim.

Master Fard Muhammad or Wallace Muhammad was born on February 26, 1877 according to the Christian Calendar.

If we add 02 + 26 we get the number 10 or 1 standing behind a zero. That is the one God standing behind and backing that which was made nothing, the black man and woman. From the year we get 1877 or 7(8-1)77 showing 7 as the number of completion 3 times representing the triple darkness from which life springs.

“For as the Father hath life in himself; so hath he given to the Son to have life in himself. And he has given him authority to judge because he is the Son of Man.” John 5:26-27

This son of man would come to usher in the new world and judge this world. If this occurred 2,000 years ago then we would not still be dealing with satan’s world today. But as we can see we live in a greedy war hungry and power driven world to this day.

This illustrates that a man will judge a man, not a spirit, but a man. According to Elijah Muhammad, “the base of spirit is form”. Spirit can only act through a form.

The formless God or the spirit God is just a plain lie. This lie has kept us from connecting with our divine or higher self as it causes us to separate the two. The spirit of God lies in you. This spirit must work through a form.

Wallace Fard Muhammad traveled the entire world. He could speak 16 languages fluently and write 10 of them. He learned the language of the birds and extracted the language of the people on Mars and had knowledge of all life in the universe. He had been in North America for 20 years before making himself known in 1930. At this time he raised Elijah Muhammad and taught him for 3 years and 4 months before his departure.

We do not know much about Master Fard Muhammad’s Sister but we do know that he had one. His Father had a child prior to Walace Fard Muhammad who was woman.

Much of what we know about Master Fard Muhammad’s Father comes from the teaching of Elijah Muhammad. We know that he was a man of very dark complexion and was one of the original people. He went to the Caucasus mountains and found his wife, and their union would bring Master Fard Muhammad into the world.  He could recite the history of the entire world dating back 150,000 years and knew the beginning and end of all things.

The reason Master Fard Muhammad’s father had to go to the caucaus mountains to find a wife was to fulfill the scriptures “God did by sending his own Son in the likeness of sinful flesh to be a sin offering. And so he condemned sin in the flesh.”

The word “likeness” reveals that he (W. F. Muhammad) was not actually a being of sinful flesh but would resemble those who were. We see from the one picture that we have of Wallace Fard Muhammad that he was of very fair skin resembling the Caucasian who he condemned in his work.

The appearance of Master Fard Muhammad also fulfills the scripture that he would come “without observation” as a “thief in the night.”

This scripture is actually clear proof that the bible is refrencing one to come. The footnote in Revelation 16:15 that refers to Mathew 24:44 where it states “Therefore you also must be ready, for the Son of Man is coming at an hour you do not expect.”

The True History of Master Fard Muhammad – Is The Messiah Here Already?

He came to the United States and took a man with a education and taught him for only 3 years and 4 months. That man would go on to completely change the conscience of all black people on the planet earth.

Think this over. He raise a man who had a speech impediment and gave him enough information to raise a nation. What other organization of that time is still standing like the Nation of Islam?

Master Fard Muhammad also gave the measurements of our solar system and taught of the seven inhabited planets within our solar system. He introduced the information that would help to create modern genetics.

The information that he revealed was not in the textbooks in 1933. Master Fard Muhammad is that one, the savior with the wisdom of the Most High in the last days.

He built a spaceship that surpasses modern technology by millions of years. This is where he currently resides with Elijah Muhammad.

For more on the function of the mother plane see our blog post see Is Honorable Elijah Muhammad Still Physically Alive?

“We believe that Allah (God) appeared in the Person of Master W. Fard Muhammad, 1930—the “Messiah” of the Christians and the “Mahdi” of the Muslims.”

Muhammad, Elijah. Message To The Blackman In America (p. 164).