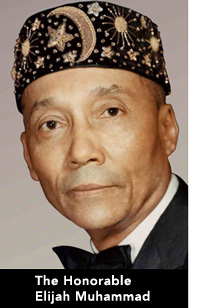 The teachings of the Honorable Elijah Muhammad have had a profound impact on the psyche of Black America. These Elijah Muhammad Quotes make it obvious why he has had such a lasting impact. He is the eternal leader of the Nation of Isalm and the teacher of many great thinkers of our time.

While his impact is great many are still robbed of his life-giving teachings due to propaganda. Here are 10 truly eye-opening Honorable Elijah Muhammad quotes.

God is a man and we just cannot make Him other than man, lest we make him an inferior one; for man’s intelligence has no equal in other than man. His wisdom is infinite; capable of accomplishing anything that his brain can conceive. A spirit is subjected to us and not we to the spirit. Habakkuk uses the pronoun “He” in reference to God.This pronoun “He” is only used in the case when we refer to a man or boy or something of the male sex. Are we living in a material universe or a “spirit” universe? We are material beings and live in a material universe. Would not we be making ourselves fools to be looking forward to see that which cannot be seen, only felt? Where is our proof for such a God (spirit) to teach that God is other than man? It is due to your ignorance of God, or you are one deceived by the devil whose nature is to mislead you in the knowledge of God.

The original man, Allah has declared, is none other than the black man. The black man is the first and the last, maker and owner of the universe. From him came all brown, yellow, red and white people. By using a special method of birth control law the black man was able to produce the white race. The true nature of the Black and white mankind should be enough to awaken the so-call Negroes and put them on their feet and on the road to self-independence. Yet, they are so afraid of the slave-masters that they even love them to their destruction and wish that the bearer of truth would not tell the truth even if he knows it.

Quotes By The Honorable Elijah Muhammad – Where White People Come From

Quotes By The Honorable Elijah Muhammad – Divide and Conquer

Mr. Yakub taught his made devils on Pelan: That — when you go back to the holy black nation, rent a room in their homes. Teach your wives to go out the next morning around the neighbors of the people, and tell that you heard her talking about them last night. When you have gotten them fighting and killing each other, then ask them to let you help settle their disputes, and restore peace among them. If they agree, then you will be able to rule them both. This method the white race practices on the black nation, the world over. They upset their peace by putting one against the other, and then rule them after dividing them.

The following blueprint shows the way:

1. Recognize the necessity for unity and group operation (activities).

2. Pool your resources, physically as well as financially.

3. Stop wanton criticisms of everything that is black-owned and black-operated.

4. Keep in mind — jealousy destroys from within.

5. Observe the operations of the white man. He is successful. He makes no excuses for his failures. He works hard in a collective manner. You do the same.

The present wheel-shaped plane known as the Mother of is mile of a and is the largest mechanical man-made object in the sky. It is a small human planet made for the purpose of destroying the present world of the enemies of Allah. The cost to build such a plane is staggering! The finest brains were used to build it. It is capable of staying in outer space six to twelve months at a time without coming into the earth’s gravity. It carried fifteen hundred bombing planes with deadliest explosives — the type used in bringing up mountains on the earth. The very same method is to be used in the destruction of this world. The bombs are equipped with motors and the toughest of steel was used in making them. This steel drills and takes the bombs into the earth at a depth of one mile and is timed not to explode until it reaches one mile into the earth. This explosion produces a mountain one mile high; not one bomb will fall into . They will all fall on cities. As Ezekiel saw and heard in his vision of it (Chapter 10:2) the plane is terrible. It is seen but not think of trying to attack it. That would be suicide!

How to Eat to Live? Allah (God) said to me, in the Person of Master Fard Muhammad (to Whom praise is due forever) that we who believe in Him as our God and Saviour should eat but one meal a day (once every 24 hours). Eat nothing between meals, not even candy, fruit, or anything which would start the stomach, digestive processes. In this way, our eating of the proper foods and drinks — at the proper time — would extend our life to 140 years. This would protect us from sickness. He said if we would start our infants eating one meal a day, as soon as they are able to partake of solid foods, it would enable them to live to an age of 240 years. I then asked Him, “How about eating once every 48 hours?” He said to me, “You would be ill only one day out of four or five years.” I asked Him what was the cure for that one day of illness? He said “Fast three days and you will be all right.” I asked Him, “What about eating one meal every three days?” He said “You will never be sick if you eat once every 72 hours.” This is about two meals every six days, which would extend our lives to a span of 1,000 years — for there is no poison from the previous meal three days ago which has enough power to do you any harm. The fast destroys the accumulation of food poison.

We, the original nation of earth, says Allah, the Maker of everything — sun, moon and stars and the race called white race — are the writers of the Bible and Qur-an. We make such history once every 25,000 years. When such history is written, it is done by twenty-four of our scientists. Once acts as Judge or God for the others and twenty-three actually do the work of getting up the future of the nation, and all is put into one book and at intervals where such and such part or portion will come to pass, that people will be given that part of the book through one among that people from one of the Twelve (twelve major scientists) as it is then called a Scripture which actually means script of writing from something original or book. There is a significance to the number 24 Scientists and the 25,000 years. The number twenty-four Scientists used is in accordance with the hours in our day and the measurement of the circumference of our planet around the equator and in the region of our Poles, Arctic and Antarctic Oceans. Our planet is not exactly 25,000 miles in circumference, it is 24,896 and we, according to astronomy, don’t have a full 24-hour day but near that–23 hours, 56 minutes and 46 seconds. The change made in our planets rotation at the Poles is about one minute a year and takes 25,000 years to bring about a complete change in the region of the Poles. The actual Poles are inclines 23 2 degrees to the plane of its orbit. The original black nation used 23 scientists to write the future of that nation for the next 25,000 years, and the 24th is the Judge or the one God, Allah. Allah taught me that, once upon a time they made history to last for 35,000 years. Let me stop here and say this: