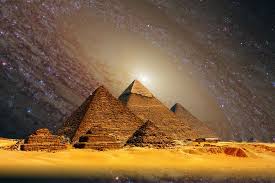 Are you wondering who built the pyramids? There are seven functions of the pyramid but one purpose was to help our ancestors chronicle the movements of the stars. This was important because our ancestors knew that there was no difference between astronomy and physics (as above, so below). The true original purpose of the great pyramids of G has escaped modern archeologist. Those Egyptologists who get close to the information revealed in this blog post are often ridiculed and discredited.

Who Built The Pyramids of Gza?

There are seven basic functions of the pyramids. Much of the technology used by the ancient Egyptians been lost during the cycle of self-forgetfulness. This is not “Alien technology” or the work of some “Ancient Aliens” as some early astronaut theorist would like you to believe. But as Egypt was known as Kemet meaning “land of the Blacks”, you can find the origins of the pyramids and their purpose in ancient Black technology.

The Seven Purposes of The Pyramids of Giza

The First Purpose of The Pyramids of Giza – Electric Power

The first function of the Pyramid of was to transmit electricity. The type of electricity is transmitted was at a higher energy level than what we use today using the assistance of wires. Nicola Tesla actually was getting close to ‘rediscovering’ the use of this type of technology but the greedy nature of those in power did not allow him to test his more scrutinized or ‘far-fetched’ ideas.

As light ranges from infrared to ultraviolet, electricity, and all seven states of matter range in this way. The form of electricity used was transmitted directly through space (ether) like the way radio waves are transmitted today. The receiving stations for these transmissions were known as obelisks. Two that have been moved from their original location are the one in Central Park in New York and Cleopatra’s Needle in London.

The ancients had a high reverence for technology and saw it as a gift from . They only used this technology when it was necessary for the benefit of the group or the whole community. At other times they used simple hand tools. These hand tools were used as our ancient society understood the importance of the gained from everyday work. This is why many believe that the ancient Egyptians did not have advanced technology as the vast majority of tools that they find seem primitive. They also date the pyramids to the time of Pharaohs, which is wrong as the pyramids of Giza were built about 15,000 years ago. However, they understand that the stone is too hard to cut using these tools so they go as far as to attribute them to aliens rather than their true Black makers.

The technology used during that time added value to the natural balance of the forces of the universe. Technology today actually causes degeneration in the form of the evil extremes of greed and coldheartedness.

The Second Purpose of The Pyramids of Giza – Preservation

The pyramids are used to preserve life, both animals and plants during natural cataclysm. This is where the legend of Noah’s Arc comes from.

The Third Purpose of The Pyramids – Space Travel

Pyramids that are larger than the pyramids of Giza are made from asteroid stone. These monolithic Pyramids are uses to transport large groups of people (12,000) throughout different parts of the cosmos. This is how the ancients traveled from the star system Sirius to seed the planet earth.

The Fourth Purpose of The Pyramids – Balance the Earth Energies

The earth naturally has 12 nodes or points of energy where space energy enters our planet. These energy points need to be kept in balance in order not to disrupt the earth’s natural magnetic field. This magnetic field protects the earth from harmful rays and meteors.

The great pyramid is designed by the leading scientist or God of a given history. It is the Book of Stone providing the history (future) of the events that are to take place over that 25,000 year period. We are in the year 15,000 or this 25,000 year period. A major event occurred 6,000 years ago that shapes the world that we see today, “this world” in the bible. They write this history in the sizes and types of stones used.

For example, there are 144,000 casting stones or limestone blocks used to build the Great Pyramid. These also represent 144,000 aspects of character to be restored after the cycle of self- (the past 6,000 years.

The Sixth Purpose of The Pyramids of Giza – Ascension and Ressurection

Pyramids were used as ascension machines and resurrection machines. Bodies were removed after the soul (personality) ascended primarily to the star system Sirius as was the case with the 60,000 Elohim.

There are 144,000 preserved bodies underneath the pyramid of Giza protected by magnetism and can only be opened by one of the 144 chiefs. These bodies are going to be used as the cycle of self-forgetfulness comes to a close. All of the seven have received one of these bodies and we will see ordinary black people begin to receive these bodies over the next years to come. These are going to become the Judges of the new society (promised land).

These bodies are actually preserved for black people who are alive now. These individuals will have activated their 12 strands of DNA through dietary restriction and mental exercises similar to ancient initiation. This modified initiation process is given in Level 2 of the book Black Root Science. These elect will be resurrected consciously into one of the preserved bodies. These elect can come from any society of the black nation but the vast majority of them will be the decedents of slaves.

These 144,000 perfectly preserved bodies will give birth to perfect children and the population will increase to 1 billion 8million as the remainder of black Gods reincarnate.

The Seventh Purpose of The Pyramids of Giza – Divine Unity

The final purpose of the pyramids is to help facilitate Divine Unity which is held in the custody of the 24 Elders. This is a particular state of mind known as ‘heaven’. This state of mind is one where a person becomes one with his eternal self.