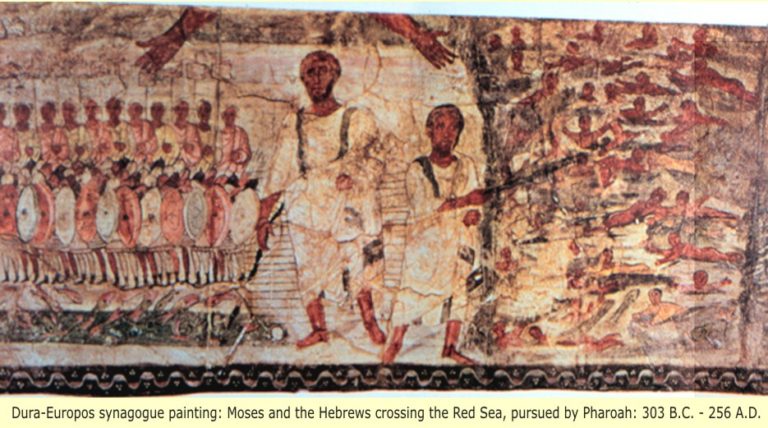 Are you looking for a Story of Moses Summary? The Story of Moses in the Bible is very important but can sometimes lead to confusion. In fact, it is actually a mixture of a few historical events and part prophecy.

In this blog post we break down the story of Moses and the Israelites and the prophesy of Exodus.

The Exodus story in the bible is primary a mixture two stories.

The first event described in Exodus is the story of Moses civilizing and re-establishing the Laws of Yahweh for the Caucasian of Europe 4,000 years ago.

All non-blacks were made on the island of Patmos 6,000 years ago. They were lead into the promised land of North Africa and the Middle East at that time. They started to bring discord to the peaceful community and the King at the time expelled them to the Caucus Mountains of Europe. It was here that they were ‘roped in’ and incarcerated in what was known at the time to be a harsh place to live. Furthermore, they began to degenerate during this time period as they stopped following the laws established for them by Yahweh (Yakub) their maker.

The Caucasian remained in a deteriorating condition in the Caucus mountains for 2,000 years. The reason for their drastic deterioration was due to neglecting aspects of moral character. Their savior was born 4,000 years ago and his name was Moses. It was Moses mission to bring the Caucasian back into civilization so that they could fulfill their destiny and rule the earth.

Moses the Caucasian in a very poor condition. The smartest of them were in the condition similar to modern depictions of the club carrying caveman. They could only make animal sounds before Moses taught them language. The worst of them had degenerated past the point of rehabilitation and had become the ape species that we see today.

Over the course of 40 years, Moses walked the Caucasian out of Europe across the desert and into the Middle East. During this time he civilized them by re-establishing the Laws of Yahweh.

They were lead by Elohim in spacecraft that they called Pillars of Fire. They called them pillars of fire because the energy field that surrounds them gives off a light that resembles a flame.

Exodus Prophecy – The Story of Moses and The Israelites

14 And as Moses lifted up the serpent in the wilderness, even so must the Son of man be lifted up:

In the above verse, the Son of  refers to the modern-day Israelites (Yahweh’s Chosen Elect). These are the chosen people of Yahweh or the decedents of slaves in North America. Their exodus will be both spiritual and physical.

The spiritual exodus will take place as they are lead out of the land of self-forgetfulness and into the promised land of knowledge of self and the ancestors.

The physical exodus will take place over the next 40 years or so as our people start to relocate to the land of their ancestors, Israel. As time passes the area that is now desert will begin to become fertile and green.

This process has already started as their is already a community in the city of Dimona, Israel that was lead by Ben Ami.

We know that Egypt was used to represent America simply for the fact that it was referencing the most powerful country during the end of day. We also were enslaved here for 400 years as it is written about Abrahams seed. When God appears to Moses he tells him that he is fulfilling his promise to Abraham. Evidence of this is given throughout Exodus.

The Story of Moses Bible Exodus as Prophecy For America

“but the Israelites were exceedingly fruitful; they multiplied greatly, increased in numbers and became so numerous that the land was filled with them.”

The above verse references one of the requirements to bring this cycle of self-forgetfulness to an end. The Black Population must reach the sacred number of 1billion 8million. We are close to this number as we discuss in our blog post, Supreme Mathematics.

9 “Look,” he said to his people, “the Israelites have become far too numerous for us. 10 Come, we must deal shrewdly with them or they will become even more numerous and, if war breaks out, will join our enemies, fight against us and leave the country.”

The other requirement is for 144,000 of us to all sympathy for “this world” and get in touch with the first self (God in You) thus unlocking the 10 strands of dormant DNA. The people who do this will become the leaders of the new society.

16 “When you are helping the Hebrew women during childbirth on the delivery stool, if you see that the baby is a boy, kill him; but if it is a girl, let her live.”

The war against Black Men has been written about extensively by our scholars.

23 During that long period, the king of Egypt died. The Israelites groaned in their slavery and cried out, and their cry for help because of their slavery went up to God. 24 God heard their groaning and he remembered his covenant with Abraham, with Isaac and with Jacob. 25 So God looked on the Israelites and was concerned about them.

The above verse is a reference to our slavery in America.

2 There the angel of the Lord appeared to him in flames of fire from within a bush. Moses saw that though the bush was on fire it did not burn up. 3 So Moses thought, “I will go over and see this strange sight—why the bush does not burn up.”

Moses encounters the Elohim on a spaceship.